Meriem Bennani; the New York-based artist who was recently featured in the New York Times is one of the selected artists by Riffy Ahmed and Sarah El Hamed for the ARA-B-LESS? project at the Saatchi Gallery.  Our guest blogger Aimee Dawson speaks with Riffy to learn more about the project.

How did you conceive the title ARA-B-LESS ?

The project title ‘ARA-B-LESS ?’ is a neologism born of a play on the word ‘Arabness’ (Arabism). Two designs hint at the meaning behind “ARA-B-LESS ?” –  the first emphasising ‘BLESS’ suggests that Arab identity is a blessing, while the second emphasises “LESS’, the ways in which what it means to be Arab have evolved over time, perhaps losing something along the way. ‘ARA-B-LESS?’, as a question, also focuses on whether we, the artists, consider ourselves to be more or less Arab for having been born and brought up in the West, albeit by parents from Arab countries.

Can you describe the show a little? What does the performance description mean by three different ‘landscapes’?

The show integrates live performance art with video, sculpture and installation work. Operating in the interstices between reality and fiction and inspired by Grayson Perry’s Map of an Englishman, 2004, ARA-B-LESS? invites the audience to embark on a journey through three conceptually cohesive spaces each posing a unique challenge to current codes of conduct as well as questioning the existence of multifarious stereotypes and framing devices. The result is an extensive yet playful investigation of the ways in which identity is constructed as well as the ways in which it might be deconstructed and reconstructed in the realm of the hyper-real.

How do you think Arab women are perceived and represented? Are you looking at it from a ‘Western’ gaze or Middle Eastern/Arab or…?

The short answer is both from a Western and a Middle Eastern/Arab gaze, there is no limit to the ways in which women’s identity might be interrogated in the work of each artist – the whole point is to explore and ask questions. ARA-B-LESS ?, designed in broad terms to explore notions of Arabness and more specifically to explore the representation of women in these different cultures, is an essentially collaborative project. The result is a series of ongoing conversations between artist-curators Riffy Ahmed and Sarah El Hamed. Together, they have selected works by artists who complement, counter, and complicate their thinking about the representation of identity. 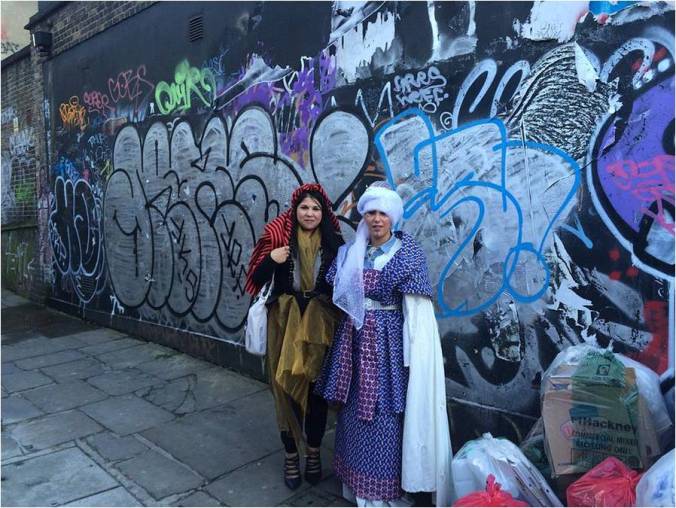 How is the work interactive? What can people expect?

There will be three performances (each 10 minutes in length) by Ahmed and El Hamed (visitors will be informed and directed by staff before each is about to start) as well as a durational performance inspired by Hassan Hajjaj’s photographic portraits. The subject of this performance, who will pose throughout the evening in a Hajjaj constructed environment, will also wear clothes designed by the artist.

Visitors to Shadi Al Zaqzouq’s work will also be able to participate by purchasing or simply trying on his eccentric creations – hijabs adorned by colourful variations on the Liberty Spike Mohawk. There will also be live music throughout the evening courtesy of Algerian singer and guitarist, Nedjim Bouizzoul.

Having spoken with Aser El Saqqa and Roya Arab, today we learn more about Alnoor Samji who looks after the evolving Volunteers Program for the Nour Festival.

Disordered World by Amin Maalouf, an exceptionally well-written assessment of how we arrived at the current messy state.  I loved the tone: often posing questions, providing the context as objectively as possible, and inviting the reader to make up their own mind.  No magical answers, but plenty to think about.

Favourite place to grab a bite.

We’re spoilt for choice: if it’s a lovely day, Leonardo Caffe on Upper Richmond Road West has a hidden garden.  Otherwise, on the opposite side of the road, Valentina serves a first-rate Italian take on the Full English.  For special occasions, it has to be The Wolseley.

What museum or gallery do you most often visit?

If you could choose one piece of art to live with, what would it be?

Isabella Plantation in Richmond Park.  It never fails to refresh the body, help you think things through and nourish the soul.  The water trickling down the brook, the vivid azaleas in late spring, the remodelled duck pond and all the other wonders have been scattered on a natural canvas to produce a work of outstanding beauty.

Most touching moment from a previous festival?

Last year’s launch event was sponsored by the Embassy of Yemen.  In preparation, the Ambassador took us on a day trip, to visit members of the Yemeni diaspora in Sheffield, including performers and artists.  The warmth and hospitality were unforgettable.

I was invited to join the Nour steering group in 2011, the festival’s third year but the first time the Arts Service extended Nour beyond Leighton House Museum.  It has grown each year, attracting new partners and audiences.  This year, Nour returns to its roots as a pioneering arts education programme with a comprehensive learning programme.

Another important development is the festival’s volunteer programme.  Whilst we have always required the support of volunteers, this year we have a structured process, with an initial team supporting the set up and marketing, and a further group of Festival Ambassadors and Workshop Assistants helping at events.

As “Europe’s most significant annual showcases of contemporary artists and culture from across the Middle East and North Africa,” what is one of the ways that the festival continues to interest and engage local and international audiences each year?

Often, festivals such as Nour allow nascent themes to gain momentum and capture the public imagination.  I remember so well, the salon on Arab Science Fiction on the first evening of the 2013 festival.  The discussion continues today around the world, with regular contributions on social media.

Alnoor Samji is a former partner of market research organisation, MORI.  He now works independently, balancing research and cultural consultancy with extensive voluntary work.  This interview was conducted by Lisa Pollman, freelance writer who connects Asian and Middle Eastern artists to the world.

Nour Festival: In Their Eyes!

Working with the Arts team at The Royal Borough of Kensington and Chelsea, the Nour Steering Committee plays a key role in the development and realisation of the festival.  But who are the members of the steering committee? What are their interests? And why are they motivated by Nour?

Today, we speak with Aser El Saqqa, a long-standing member of the Nour Steering Committee and founder of Arts Canteen.

You are originally from Palestine. How would you explain Palestinian creative traditions to someone who is new to the country?

To be born in Palestine means carrying and reinterpreting ancient social traditions and values that we grew up with. The importance of cultural resistance is deeply rooted in our popular culture and the arts.

There has been huge growth in the cultural infrastructure in Palestine over the last 30 years. This has had a significant effect on me, as I also worked in the cultural sector in Palestine for a few years, building up the capacity of local artists, galleries and festivals. When I came to London, I wanted not only to continue this work with diaspora communities, but also to bring our cultural traditions and contemporary practices to new audiences. This is part of a wider project of making visible the contribution of the Arab communities to the rich cultural life of London and the UK overall – conveying a sense of pride and community among and between us all.

You are the founder of Arts Canteen. Can you tell us more about this organisation?

Arts Canteen was founded in 2010 as a non-fixed space. Our achievements are informed by a grassroots approach of creating a network of supporters who are vital in the success of the programme. This network has been built up over the past few years and now includes a range of diaspora Arab communities in the UK, non-Arab communities who follow the arts scene in London and includes those of all ages.

Arts Canteen events have become a hub where connections are made. These connections have been undertaken through social media platforms, community and arts events across London, where ticket prices for events ensure that high quality programmes are accessible to the widest possible audience through collaborative partnerships with universities, music venues, museums, festivals and NGOs.

My favourite venue would be Union Chapel, Islington, well known for live music events and voted London’s best live music venue. Incidentally, it was the venue for Arts Canteen’s first gig in 2011.

Name the last gig you attended.

A Son of the Road by Lebanese writer Amin Maalouf.

Tate Modern is one of my favourites. It covers a broad range of painters from the 19th-century including impressionists, to modern day pop art as well as film media, video art, photography and sculpture. Also, the building is as interesting as the art itself!

What particular event/artist excites you most at this year’s Nour Festival of Arts? Why?

I would go for Hindi Zahra. She is a self-taught, multi-instrumentalist from a Moroccan mother and a French father. I like her occasional Berber whispers, and am looking forward to hearing some of the songs from her new album “Homeland” described as soulful, “surreal bluesy” and humanist.

Aser El Saqqa is curator, founder and director of Arts Canteen, an arts organisation which shines a spotlight on art from the Arab world.  This interview was conducted by Lisa Pollman, freelance writer who connects Asian and Middle Eastern artists to the world.

Nour Festival of Arts shines light on the best of contemporary arts and culture of the Middle East and North Africa each October and November in venues across Kensington and Chelsea.